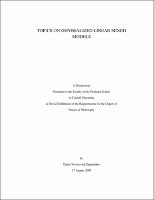 The expectation-maximization algorithm has been advocated recently by a number of authors for fitting generalized linear mixed models. However, the E-step typically involves analytically intractable integrals which have to be approximated. In the first part of this dissertation we suggest two alternative approaches to solve this problem. The first one, MCEM-SR, approximates the integrals by using a Monte Carlo method. In practice, most Monte Carlo methods require prohibitively large sample sizes for convergence. In our approach, we show how randomized spherical-radial integration [Genz and Monahan, 1997] can be adopted to dramatically reduce the computational burden of implementing EM. After a standardizing transformation, a change to polar coordinates results in a double integral consisting of a one dimensional integral on the real line and a multivariate integral on the surface of a unit sphere. Randomized quadratures are used to approximate both of them. An attractive feature of the randomized spherical-radial rule is that its implementation only involves generating from standard probability distributions. Another important feature exploits a partial linearity of GLMM with respect to a random effect vector. Having this linearity in mind we can pick the cubature knots on the sphere each of which belongs to a linear hull of a dimension significantly less than that of the sphere. This leads to a drastic reduction of the computational complexity of the suggested algorithm. In addition, the knots are chosen in a way that increases the polynomial accuracy of the approximation. The advantage of this particular SR approach stems from the fact that the complexity of evaluating the integrand dominates that of generating the Monte Carlo points. The resulting approximation at the E-step has the form of a fixed effects generalized linear model likelihood and so a standard iteratively reweighted least squares procedure may be utilized for the M-step. The other approach we suggest, EM-LA2 , is based on higher-order Laplace approximation of the integrals. First, we find a closed form of the standardized cumulants for generalized linear models which are the higher-order terms of the Laplace approximation. Then we incorporate those in the EM algorithm resulting in a fast and efficient procedure. We illustrate both methods by fitting models to two well-known data sets, and compare our results with those of other authors. In the second part of the dissertation, a double saddlepoint approximation is proposed for the number of contingency tables with counts satisfying certain linear constraints. Computation of the approximation involves fitting a generalized linear model for geometric responses which can be accomplished almost instantaneously using the iterated weighted least squares algorithm. The approximation is far superior to other analytical approximations that have been proposed, and is shown to be highly accurate in a range of examples, including some for which analytical approximations were previously unavailable. A similar approximation based on a logistic regression model is proposed for tables consisting of only zeros and ones. A higher-order adjustment to the basic double saddlepoint further improves the accuracy of the approximation in almost all cases.