Characterization Of The Antiaging Effects Of Apple Phytochemicals Using The C. Elegans Model 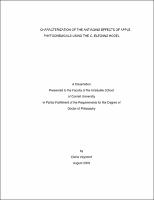 Aging is a major risk factor for many chronic diseases, including cancer and cardiovascular disease. The resulting need to understand and alleviate age-related decline has led to pharmacological manipulation of age-related degeneration in many species, including the nematode Caenorhabditis elegans, one of the simplest whole-animal models. However, few such studies have examined the anti-aging effects of natural compounds found in fruits and vegetables. Apples are the number one source of phenolics in U.S. diets. Apple phytochemicals have been shown to have a variety of salubrious effects, including high antioxidant and antiproliferative activity and the modulation of several molecular targets. We treated C. elegans with apple extracts, and found that lifespan increased significantly by up to 39%. Healthspan was also significantly improved as measured by two biomarkers, lipofuscin and motility. Additionally, animals pre-treated with apple extracts were more resistant to stresses such as heat, UV radiation, paraquat-induced oxidative stress, and pathogenic infection, suggesting that cellular defense system functions were also improved. To find the mechanisms behind these improvements, we screened several mutants that affect lifespan via different pathways. Prolonged lifespan does not appear to be mediated by calorie restriction, insulin signaling, sirtuins, or germ line signaling. Instead, the effects are at least partly due to reduced oxidative stress, as indicated by the increased lifespan of the mev-1 mutant. We also observed an increased induction of the promoter activity of small heat shock protein hsp16.2, and a reduction of induction of the promoter activity of superoxide dismutase and glutathione-Stransferase, two enzymes that attenuate excessive reactive oxidative species. This is consistent with the idea that apple extracts may protect against deleterious oxidative damage normally mitigated by sod-3 and gst-4, leading to a decreased need for this part of the endogenous antioxidant system. We propose that in C. elegans apple phytochemicals act through a synergistic mechanism that involves attenuation of ROS damage, in particular superoxide anions, and generalized detoxification of oxidation byproducts. In addition, increased induction of the promoter of hsp16.2 likely contributes to a general improvement of cellular detoxification and stress response, and explains improved survival under conditions of stress.