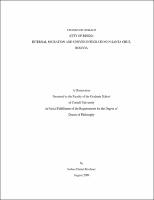 This dissertation investigates the consequences of internal migration to Santa Cruz, an expanding urban center in lowland Bolivia whose growth stems from uneven regional development. Regional divisions between the highlands and the lowlands have long afflicted Bolivia. The roots of the regional differences predate the country's independence, but they have intensified in the past decade amid unresolved power struggles between Bolivia's central government and the opposition based in the lowland region, as recent events in Bolivia over regional autonomies have demonstrated. Drawing on the perspectives of political geography, urban planning, and sociology, this study examines the processes of migrant integration and social exclusion in Santa Cruz, and how migration is affecting regional identity formation in Bolivia's lowland region. In Chapter 2, I explore the historical construction of the eastern lowlands region, called the Oriente. I trace its transformation from an isolated frontier to Bolivia's major production zone and the emergence of the regional elite though periods of economic change based on extractive industries. Chapter 3 shifts the focus to the city of Santa Cruz and argues that modernist planning in the 1950s and 1960s did not coincide with the realities of mass urban migration that ensued. I also suggest that migration-induced population growth and shifts in the local economy toward services and informal employment are creating particular patterns of urban growth and deepening socio-economic polarization. In Chapter 4, I analyze migrant integration and social exclusion through migrant interviews in several urban districts, the ways that civil society organizations potentially intermediate between migrants and longerterm residents, and connections between migrants and local institutions. Chapter 5 examines the connections between migration flows, growth of the informal economy, and conflicts over public space in Santa Cruz as a window into the dynamics of migrant integration and exclusion. I investigate the spatial dimensions of informal commerce in the city and analyze a municipal plan for reorganization of public markets, as well as contrasting visions of public space from planners, long-term residents, informal workers, and migrants. In the perspective taken here, struggles over public space reflect unresolved tensions around race, ethnicity, and space in a changing city.