Belief In Authoritarianism: Religious Revivals And The Local State In Russia And China 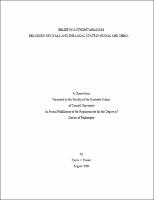 What are the political consequences of growing religiosity in Russia and China -- two countries that share a communist past and thus a long history of atheism, but have followed very different paths of political and economic liberalization since the 1980s? In this dissertation, which is based upon nearly two years of fieldwork in multiple sites within these two countries, I carry out a systematic comparison of the relations between religious communities, on the one hand, and the Chinese and Russian states, on the other. This comparison leads to five conclusions. First, there is compelling evidence that the emergence of a robust religious associational life is neither a force for democratization nor a sign of impending regime crisis in Russia and China. Instead, religious communities are reproducing elements of the political contexts in which they are embedded and reinforcing authoritarian structures of political rule. Second, religious groups are playing an increasingly important role in the political economy of both states. Third, while Moscow and Beijing have set the parameters on religious expression, it is at the local level where the interactions between religion and politics actually take place and where, as a consequence, the relationship between the two sets of players is defined. Fourth, in direct contrast to what the literature on civil society within authoritarian states suggests, church and local-state relations in both Russia and China are cooperative, not conflictual. Just as religious groups court those in power, local governments likewise rely on these groups to take on some of the responsibilities of governance. Finally, collaboration is not based on faith; rather, it is based on convergent interests, with bargaining between religious leaders and local state officials focusing on the distribution of money, power and prestige. Indeed, material, not spiritual concerns drive most the interactions.