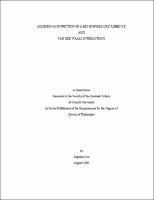 This dissertation contains two parts. The part I is on the theory of adhesion and friction behaviors of dry adhesives. Many synthetic bio-inspired adhesives consist of an array of micro-fibrils attached to an elastic backing layer, resulting in a tough and compliant structure. In this part, we first present a three dimensional (3D) model for adhesion enhancement that occurs due to trapping of the interfacial crack in the region between fibrils. Energy release to the crack tip is attenuated because it has to go through the compliant terminal film between fibrils. Using perturbation theory Our model and a finite element method (FEM) we solve for the shape of crack front. also allows us to study how adhesion enhancement depends on the arrangement of fibrils. Then, we examine the nonlinear deformation of a single fibril subjected to a combination of shear and normal loads. An exact closed-form solution is obtained using elliptic functions. The prediction of our model compares well with the results of an indentation experiment. Finally, we model the response of a film-terminated micro-fibril array subjected to shear through contact with a rigid cylindrical indenter. The model matches the experimentally measured shear-force response. The second part is on van der Waals interactions. Van der Waals (vdW) forces are forces between neutral atoms or molecules and are present in all materials. Lifshitz theory of van der Waals interactions is reviewed in the first chapter of this part. It is often assumed that Lifshitz's theory is equivalent to the surface mode method proposed by van Kampen et al. A revisit of van der Waals force between two parallel plates shows that certain procedures in the surface mode method are inconsistent with Lifshitz's theory. Finally, numerical techniques (boundary element method and finite element analysis) to compute vdW forces are formulated. In principle, these numerical approaches can be used to evaluate the van der Waals force between dielectric solids with arbitrary shapes.