Things, Places, And Possibilities: An Inquiry Into Structural Deviations 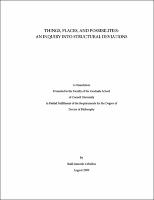 In this work I am concerned with the following issue in metaphysics: how is the part-whole structure of the material world related to the part-whole structure of spacetime? Is it metaphysically necessary that those structures perfectly align, or is it possible that they somehow mismatch? If they must perfectly align, what explains that necessity? And if they may somehow mismatch, what sorts of disparities are possible, and why? I argue that the metaphysical possibility of certain sorts of deviations -- which have not been discussed or even entertained in the literature -- follows from minimal and otherwise plausible assumptions about modality and the nature of both part-whole relations and relations of spatiotemporal location. ese are possibilities in which a material thing, x, is part of a material object, y, but the region at which x is located is not part of the region at which y is located, and in which the region at which x is located is part of the region at which y is located, but x is not part of y. That these possibilities follow from very weak assumptions makes it very hard to resist them -- I argue that radical measures are required to avoid them. I also discuss a few consequences of accepting these possibilities for other debates in metaphysics. I delve deeply into two such consequences. First, I suggest that these possibilities afford a new way of resisting an influential argument for the existence of temporal parts: the so-called argument from vagueness. Second, I argue that these possibilities allow us to have indeterminacy in matters of part and whole without indeterminacy in matters about identity, existence, and cardinality. This provides a new way of defending indeterminacy in matters of part and whole against inﬂuential objections in the literature.