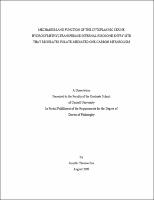 Folate-mediated one-carbon metabolism is a network of interdependent pathways in which single carbon units derived from serine or glycine are activated and used for the biosynthesis of purines, thymidylate, and methionine. Folate-mediated one-carbon metabolism plays essential roles in development, DNA replication, the maintenance of genome stability, and gene expression. Consequently, impairments in this network are associated with an increased incidence of neural tube defects, cardiovascular disease, and cancer. Cytoplasmic serine hydroxymethyltransferase (cSHMT) serves as a source of folate-activated one-carbon units by catalyzing the conversion of serine and tetrahydrofolate (THF) to glycine and 5,10-methyleneTHF, the one-carbon donor in the thymidylate biosynthesis reaction. cSHMT is regulated by several factors at both the transcriptional and translational levels. At the translational level, cSHMT expression is enhanced through an internal ribosome entry site (IRES) located in the 5'untranslated region (UTR) of the transcript. IRESes are cis-acting regulatory elements that permit 5'-cap-independent translation by interacting with IRES trans-acting factors (ITAFs) and recruiting the 40S ribosomal subunit. IRESes permit protein synthesis when cap-mediated ribosome scanning is impaired. Although it had previously been reported that the 3'UTR of the cSHMT transcript and the proteins CUG-Binding Protein 1 (CUGBP1) and heavy chain ferritin (H ferritin) influence the IRES-mediated translation of cSHMT, the mechanism by which they act and the physiological conditions that stimulate cSHMT IRES activity had not been determined. The results of the current studies reveal that by interacting with both the 3'UTR and a novel ITAF heterogeneous nuclear ribonucleoprotein H2 (hnRNP H2), CUGBP1 circularizes the cSHMT transcript, thereby enhancing translation rates. Although H ferritin does not play a direct role in the IRES-mediated translation of cSHMT, it may stimulate IRES activity by facilitating the interaction between CUGBP1 and hnRNP H2. The results of the current studies also reveal that the cSHMT IRES functions to enhance rates of cSHMT protein expression in response to UV-induced cellular stress. Following exposure to UV radiation, CUGBP1, hnRNP H2, and H ferritin protein levels increase in the cytoplasm. This stimulates cSHMT IRES activity, increases cSHMT protein levels, and allows for the production of thymidylate necessary for DNA repair.