Spatial Boundaries And The Colonial Project 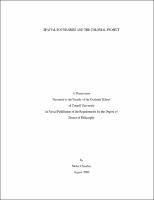 Through readings of works by Jules Verne, Sa'adat Hasan Manto, Patrick Chamoiseau and Michael Haneke this dissertation argues that to understand colonialism -- an exercise in spatial expansion -- one must analyze the interaction of space with the colonial subject. Central to this thesis is the territorial fetish of the colonial project that defined the world as an extension of European frontiers. I show how by following imaginary histories, these colonially-generated spatial paradigms limit the definition of the world to its physical expanse, reducing all markers of plurality to a conquerable unit of spatial territory. I argue that the key to understanding the knowledge that shaped both the colonizing and the colonized subject lies in deciphering the operations that provoke and sustain the conception of such a temporally defined geography. This space, once produced, becomes an element in its own perpetuation. While tracing the resonance of space with questions of nationalism, gender, race and other aspects of identity, I pay special attention to the influence of historical conditions contemporary to these spatial reconfigurations. The first chapter reveals how Verne's novel presents colonial structures that produce a globally homogenized network of infrastructure necessary to cash in on the commodity of time. The second chapter focuses on the interrelatedness of location and identity in the short story "Toba Tek Singh" where the protagonist subverts the newly formed border between India and Pakistan to assert his own identity. The chapter on Texaco discusses how the woman protagonist exerts her identity within a spatial context and thus is able to imbricate her presence and history into the postcolonial debate. The last chapter studies Haneke's film Cache, and takes up the issue of France's return to its colonial past. This chapter argues for understanding the interaction between the colonial subject and colonial history in order to dismantle the space of otherness. The colonial spaces in the Urdu short story "Toba Tek Singh" and the French works Le tour du monde en quatre-vingts jours, Texaco and Cache resist appropriation and offer radical reconfigurations that critique any notion of space as a neutral entity.