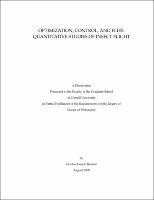 Insects are graceful and varied locomotors -- flying, darting, and hovering with apparent ease and sophistication. Accordingly, their abilities have long engendered the curiosity of scientists and the envy of aerospace engineers. This thesis aims to shed light on some basic questions regarding the aerodynamics and control of insects, primarily through the guise of studying the fruit fly Drosophila melanogaster. Via these investigations, I attempt to elucidate some of the overarching problems in biolocomotion regarding optimization of movements, control of maneuvers, and the interaction between animals and their surrounding fluid. Chapter 2 uses a quasi-steady model of intermediate Reynolds number aerodynamics to estimate the forces and torques experienced by an insect during hovering flight and asks whether the observed kinematics are energyminimizing. Since insect flight is such a costly endeavor, it makes for an interesting test case of the hypothesis that animals move in a manner which minimizes metabolic cost. The quantitative study of insect flight is currently a data-limited field, hence, it is imperative to realize new methods for obtaining and digitizing flight sequences. Chapter 3 describes the Hull Reconstruction Motion Tracking (HRMT) method, which takes three camera views of a freely flying fruit fly, and by using visual hull reconstruction and principal components analysis, automatically tracks the insect body and wings both quickly and accurately. Using the data generated from applying HRMT to experimentally recorded movies, Chapter 4 analyzes the flight of ascending fruit flies. Having obtained several flight sequences of flight in which the filmed insect is moving almost straight upwards, we analyze the dynamics of how a steady-state ascending velocity is achieved, and what control knobs a fly can use to adjust this state. Additionally, we look at how fruit flies can quickly transition from one ascent speed to another. The optimization line of thought highlighted in Chapter 2 is extended in Chapter 5, but is combined with some of the obtained experimental data from our collaboration with Leif Ristroph and Itai Cohen. Here, we relate the concept of optimization in locomotion to variations apparent within a population. Through utilizing some of the methods from sloppy modeling, we explore the idea of a fitness landscape for wing kinematics, and how that might effect the spread of data observed in experiments. Finally, chapters 6 and 7 investigate aspects of a model of falling plates at intermediate Reynolds numbers which is used as an underpinning for much of the work done here. Chapter 6 studies how the model transitions to chaos through a period-doubling bifurcation, and Chapter 7 asks what type of flight trajectories are possible if the system is driven by a rotational actuator.