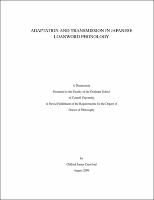 This dissertation focuses on two issues in loanword phonology: first, how are loanwords represented in the lexicons of L1 speakers; and second, how do loanword adaptation patterns become established in a speech community over time. In examining these questions, I propose a theoretical framework for loanword borrowing in which the nativization of loanwords can take place during either of two processes: the initial adaptation of a new loanword by a borrower, or the transmission of loanwords from speaker to speaker within a social network. Using data from Arakawa's (1977) dictionary of English loanwords in Japanese, I show that historical adaptation patterns are affected not only by native phonological constraints, but also by type frequency and phonological similarity to other loanwords. Non-native phonotactic sequences are more likely to be preserved in more common phonological environments than in less common environments. I present an OT analysis of the historical variation in adaptation conventions, showing that the set of possible adaptations for a loanword can be obtained by reranking loanword-specific faithfulness constraints against a fixed ranking of native markedness constraints. However, this analysis cannot explain the origin of frequency and phonological neighborhood effects on adaptations. To account for these effects, I argue for a model of the lexicon in which lexical entries are organized on the basis of phonological similarity. I then develop a connectionist model of loanword adaptation to show how native constraints interact with type frequency in the adaptation of new loanwords. As for the establishment of adaptation patterns in a speech community, I argue that the transmission of loanwords from one speaker to another plays an important role. Based on recent research on the structure of social networks, I develop an agent-based model of loanword transmission within a network of speakers, showing that in general transmission causes a nonlinear amplification of the effects of nativization at the level of the individual speaker. I apply this model to the attested rates of nativization of various non-native patterns in Japanese loanwords, showing that Japanese speakers before 1890 tended to palatalize coronal stops before /i/ in loanwords at a much greater rate than they nativized other non-native patterns. After 1890, the attested rate of coronal palatalization in new loanwords drops to roughly the same rate as other nativizations. This data suggests that before 1890, coronal palatalization was a categorical process for many Japanese speakers, whereas after 1890, perhaps because of increased Englishlanguage education at this time, /ti/ and /di/ became allowable sequences in loanwords and palatalization became a low-level gradient process occurring during loanword transmission.