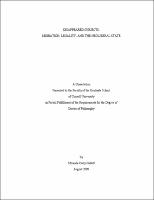 This dissertation examines the cultural condition of migrant "illegality" and "temporariness" refracted through the experiences of Salvadoran workers on the poultry disassembly line in rural Arkansas. While the legal structures and practices of the United States government produce a condition of "illegality" around transnational migrants' bodies, this situation is obscured through the ideological work of legal and political discourse. The impact of this is to "disappear" the migrants as rights-bearing subjects while making them hyper-visible as cultural Others, creating a mobile space of exception around the body of the migrant. Companies are then free to regularly violate labor and safety standards, treating migrants' working bodies as disposable resources. Migrants' lives and subjectivities are fraught with contradictions that reflect those emergent from the neoliberal capitalist order and from the state's construction of "illegality." Following a moment of illicit mobility across international borders, migrants often find themselves spatially enclosed. Salvadoran transnational migrants construct an elaborate moral discourse on work ethics to narrate their lives and trajectories as valid and valuable. Drawing upon notions of work and honor from Salvadoran cultural contexts as well as Arkansan, they self-identify as tough, flexible workers, ready to work overtime on demand and unwilling to reclaim public benefits such as workers' compensation. In order to assert their humanity over and against a legal-political discourse that defines them as illegitimate, migrants assert themselves within a moral economy of work. Ironically, this discursive strategy contributes to neoliberal ideologies that seek to reduce workers to a disposable and flexible labor pool. Rather than an "exception" to neoliberalism therefore, migrants are the disappeared subjects at the foundation, both material and ideological, of neoliberal regimes. This moral discourse therefore represents, simultaneously, the agentive response of migrants to their socio-legal exclusion, and the implosion of global cultural forms of neoliberalism into migrants' lives and world-views.