Atomic-Scale Studies Of Structure And Bonding At Perovskite Oxide Heterointerfaces 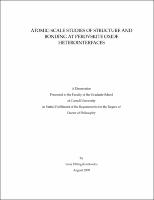 Perovskite oxides exhibit an almost universal range of ground states including insulator, semiconductor, metal, superconductor, ferromagnet, antiferromagnet, spin glass, ferroelectric, and piezoelectric. Many of these phenomena occur in materials that are lattice-matched within a few percent of one another, giving rise to the possibility of heteroepitaxial structures using perovskite oxides, accessing these multiple degrees of freedom. The existence of interfaces can, however, greatly affect the macroscopic properties of these heterostructures, leading on the one hand to exotic new phases stabilized at the interface or on the other hand to the degradation of bulk-like properties. Here scanning transmission electron microscopy (STEM) in combination with electron energy loss spectroscopy (EELS) is used to study interface phenomenon in perovskite-oxide heterostructures. In STEM the self-focusing of the probe electron wavepacket by channeling along a zone axis in a crystalline material can strongly affect the annular dark field (ADF) image contrast. By exploiting these channeling effects, atomically thin, buried SrTiO3 layers on Si were imaged in plan view, revealing a nonuniform coverage by epitaxial SrTiO3 islands and 2x1 Sr-covered regions. The dewetting of thin SrTiO3 films grown on Si(100) is caused by a phase-separation instability as predicted by density functional theory calculations. Improved coverage was obtained by choosing growth conditions away from equilibrium. Atomically abrupt interfaces have been demonstrated for all-oxides heterostructures. However, for most systems there are intrinsic limitations to the abruptness of an interface. Polar discontinuities at oxide interfaces can cause atomic reconstruction. In LaVO3 /SrTiO3 multilayers a second effect, preferential Sr surface segregation, is shown to dominate. The vanadate layers exhibit a growth asymmetry, with diffuse lower and atomically-abrupt upper interfaces. This suggests that segregation processes can set an upper limit to the obtainable interface sharpness in perovskite oxide heterostructures. Starting with an abrupt interface between LaVO3 and LaVO4 , spatially resolved EELS is used to probe how the transition from V 3d2 in LaVO3 to V 3d0 in LaVO4 is made. Although no bulk phase of LaVO x with V 3d1 configuration exists, a nanometer-wide region of V 3d1 is found at the LaVO3 /LaVO4 interface, rather than a mixture of V 3d0 and V 3d2 . This two-dimensional sheet of 3d1 electrons is an example for electronic reconstruction at a complex oxide interface, which can be used to induce and stabilize non-bulk-like valence states. How does the presence of interfaces affect the physical properties of the complex oxide heterostructure? La0.7 Sr0.3 MnO3 is a conducting ferromagnet at room temperature. However, in manganite/titanate tunnel junctions interface spin and charge modulations are thought to create an interfacial dead layer, thus fundamentally limiting the use of this material in small dimensions. Here, the degradation of the magnetic and transport properties of La0.7 Sr0.3 MnO3 /SrTiO3 multilayers is found to correlate with a higher degree of intermixing at the interfaces and the presence of extended cation defects in the La0.7 Sr0.3 MnO3 layers. When these extrinsic defects are eliminated, metallic ferromagnetism at room temperature can be stabilized in ultrathin manganite layers.