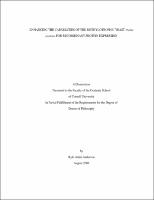 NY-ESO-1 is an important cancer immunotherapy target that has proven to be impossible to produce in soluble form in Escherichia coli. Targeting this protein for secretion in Pichia pastoris results in its retention within the cell. By utilizing the downstream purification methods developed for E. coli inclusion bodies, we are able to purify NY-ESO-1 aggregates from P. pastoris lysate. The his-tag is cleaved off by unknown cellular processes preventing the purification of NY-ESO-1 by metal affinity chromatography. Removal of one C-terminal arginine residue destroys a potential Kex2 protease site and results in the retention of the his-tag. The A33 scFv protein is efficiently secreted by P. pastoris to the culture supernantant at levels approaching 4 g/L. An attempt was made to further enhance this yield by overexpressing two proteins involved in the last stage of protein secretion, the Saccharomyces cerevisae SNARE proteins Sso1 and Snc2. Overexpression of Snc2 or Sso1 have no impact on cell growth, and Sso1 cooverexpression leads to the enhancement of A33 scFv yields by up to 81% in high cell density fermentor cultures. Snc2 cooverexpression has no effect, and cooverexpression of either of these proteins with A33 scFv and the ER resident chaperone BiP led to a defect in cell growth and a decrease in A33 scFv yield. There is a growing body of evidence showing that certain proteins in a wide range of cell types are secreted by means not involving the classical secretory pathway. One of these proteins is enolase, and it has been shown in S. cerevisae to be capable of driving the secretion of enolase-GFP and enolase-invertase fusions to the extracellular space independent of the ER and golgi. A fusion protein between enolase and the cancer differentiation antigen MelanA was generated. In shake flask cultures, fusion protein could be detected in the supernatant by immunoblot, and additional protein was able to be liberated from the cell wall by gentle washing with buffer containing 2-mercaptoethanol. Fermentor cultures, however, accumulated very little fusion protein in the culture supernatant, but significant degradation could be detected when blotting with an anti-enolase polyclonal antibody.