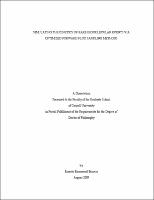 Path sampling methods have become powerful simulation tools for understanding dynamics (i.e., kinetic constants and mechanism) in complex systems. However, the challenges of applying these path sampling algorithms, such as Forward Flux Sampling (FFS), to rare events include: (i) determination of an adequate order parameter; (ii) efficient partition and sampling of the phase space; and (iii) estimation of the free energy profile and barriers. The goals of the work were twofold: (1) to develop novel methods to enhance the efficiency of the simulation of rare-event transitions, and (2) to apply these methods to elucidate the kinetic mechanism of selected transitions in complex systems. To address these shortcomings, an approach was first developed (FFS-LSE) for identifying suitable reaction coordinates to describe the progression of rare events in complex systems. A simple adaptive optimization algorithm was also proposed which optimizes the phase space sampling of the staging by concentrating the sampling in the "bottlenecks" of the FFS-type simulation. Finally, using a FFS-type algorithm as a framework to jump-start an Umbrella Sampling method (denoted FFS-US), it is shown that the kinetics and the free energy profile of the system can be evaluated in one single FFS simulation series. The applicability of these methods were illustrated by studying a biological switch and several energy surfaces having multiple metastable states, representative of complex kinetic behavior. These approaches were also applied for the kinetic study of protein folding in the bulk and under confinement of a model lattice protein, offering a valuable insight as to how the rapid initial formation of a critical core of amino acids (folding nuclei) affects the g lobal properties and the folding mechanism of a single chain protein. This study was then extended to the case of protein-fragment re-folding. It was found that the reassembly process of two model fragments is affected by the disruption of the "folding nucleus". Our results also show that the balanced distribution of the folding nucleus between protein fragments is key to their reassembly and a variable characterizing the formation of such nuclei (e.g. number of native contacts between fragments) should be included in the reaction coordinate model.