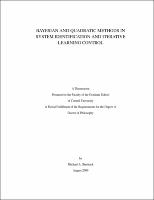 The theme of this thesis is the automated creation, updating, and exploitation of models using quadratic and Bayesian approaches when uncertainty modeling is feasible, and the design of dynamical systems that use feedback principles when tractable models of uncertainty are absent. The first chapter describes the 2005 Cornell RoboCup system. I led the mechanical design team and designed local control algorithms for a system where precise traction models were unavailable. The second chapter presents an optimal control based model for response in a visuomotor task. Its utility is in parametrization of human subject response. This work uses optimality as a structural assumption to guide system identification in terms of physiologically meaningful parameters. The third chapter demonstrates that elderly impairment in a visuomotor task is not due to increased latency, and is consistent with optimal response to increased cortical disorder. This uses both model-free cross-correlation analysis, and the previous optimal control based system identification work. The fourth chapter describes a reduced impedance actuator designed for stroke rehabilitation robotics, in which precise models of patient behavior are unavailable. In this case, we exploit basic feedback control principles to guide electromechanical design, thereby achieving the desired impedance reduction without large size and cost. The fifth chapter presents a recursive algorithm for identification of state- and input-