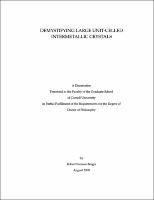 This thesis represents an effort to understand the factors that drive large unitcelled intermetallic crystal structures to exist as energy minima. In terms of its approach, the work can be divided into two relatively independent sections. The first three chapters focus on geometric features of complex intermetallic structures, telling a continuous story in which our viewpoint gradually evolves. Chapter 1 uses Mg44 Rh7 as a model system to demonstrate how one can systematically search for chemically meaningful features within a geometrically complex crystal. The importance of the features we highlight is supported by experimental site preferences and calculated Mulliken populations. Chapter 2 addresses a seemingly impossible feature of a family of cubic crystals -- pairs of perpendicular pseudo-fivefold axes in their X-ray diffraction patterns. We account for this property and nearly all atomic sites by describing the crystals as collections of three-dimensional projections of a four-dimensional Platonic solid. Chapter 3 further develops this projection method, showing that the same family of distinct structures can be expressed as a single projection of an eightdimensional lattice. The projection not only simplifies the crystals mathematically (from a unit cell with hundreds of atoms to a unit cell with just one), but unifies them as well. The fourth chapter differs from the others in that it focuses on the electronic structure of intermetallic crystals, rather than their geometry. We consider the traditional explanation for Hume-Rothery's electron-counting rules, which is based on the nearly free-electron model, and cast it into the language of linear combinations of atomic orbitals. Starting from a simple one-dimensional chain of atoms and progressing to complex upsilon-brass superstructures, we show that Hume-Rothery's observations can be rationalized in the same real-space way that chemists understand molecular electron-counting rules. As both the higher-dimensional projections and electron-counting rules of complex intermetallics are linked to their X-ray diffraction patterns, we anticipate that the two sections of this thesis will become closely connected in future work.