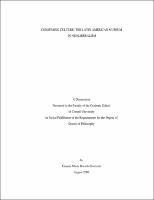 This dissertation studies figures of economy in museum fictions appearing in Latin American novels, performance art, and theater from the late 1970s to the 2000s in order to describe the cultural transformation in the region after the neo-liberal turn. In particular, it analyses how these museum fictions reflect upon the circulation of fantasies and ideas about museums in Latin America through a comparative study of Chile, Argentina, and Peru, focusing on two significant moments: the introduction of neo-liberalism in the region and its consolidation. The works examined here signal towards a particular articulation of neo-liberal assumptions in Latin American culture: museums appear as circuits of production, circulation, and exchange of cultural value where subjects test their freedom to consume and, therefore, to produce value. Thus, the first goal of this study is to characterize transformations of museum practices that take place under conflicting relations with authority and consumerism. The second is to understand how these museum fictions make explicit that cultural consumption translates as cultural production within a political economic model that acknowledges free consumption as a form of investment and as a sign of citizenry. The individual chapters discuss museum economies through the figures of waste, accountability and inflation, as significant of different instances of the establishment and consolidation of neo-liberal ideology and policies in the region. Expenditure appears in "Para no morir de hambre en el arte" (1979) by CADA and Museo de cera (1981) by Jorge Edwards, museum fictions that respond to Pinochet's shock economy. Accountability emerges as a compensation to an assumed lack of civic responsibility as the common feature to the photographic book Yuyanapaq: para recordar (2003), by the Peruvian Truth and Reconciliation Commission and Sin titulo. Tecnica mixta (2004), a theater piece by collective Grupo Cultural Yuyachkani. Finally, inflation is the mode of chosen as a strategy for the generation of value in narratives that recall the Dirty War in El pasado (2003) by Alan Pauls and Museo de la Revolucion (2007) by Martin Kohan.