Transnational Images Of Hiroshima And Nagasaki: Knowledge Production And The Politics Of Representation 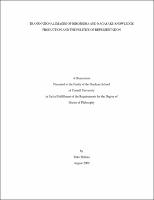 This dissertation explores how knowledge on the atomic bombings has been produced in relation to postwar reconstruction, the formation of national discourses, and memories of war and colonialism. By examining cinematic representations of Hiroshima and Nagasaki in Japanese, European, and American films, such as the canonical Hiroshima, Mon Amour and the Japanese documentaries used within it, the dissertation argues that while engaging in an open dialogue with each other in the form of refutation, divergence, and affirmation, these films respond to historical changes in the idea of a human being and the postwar world order resulting from the collapse of Japanese and European colonialisms and the emergence of the US as an atomic superpower in the Cold War. It also contends that the ostensible disjunction between Japanese and Euroamerican discursive spheres precisely constitutes a structure of interdependence substantiated by the complicity of nationalisms. This is a process of an active creation rather than a direct suppression and preclusion of knowledge. Chapter One examines the discrepancies in knowledge about films on the atomic bombing by tracing a variety of ways in which they are consumed, questioned, neglected and censored, while participating in the on-going debates about the disciplinary limitations of Japanese film studies. Chapter Two discusses how the creation of the epic world and the narrative of martyrdom that appear in Japanese films on Hiroshima and Nagasaki have contributed to the isolation of atomic victimization as a "Japanese" tragedy by locating them within a genealogy of these films made in the 1950's and the prewar and postwar histories of these cities. Chapter Three analyzes cinematic strategies to approach the atomic bomb victims, especially the performative aspect of victimization, the automaton-like human beings found in the ruins, and post-bombing victimization, in conjunction with a discussion of the plausibility of film narratives. Chapter Four reconsiders Hiroshima, Mon Amour by redefining the signification of Hiroshima in this film. It posits that what this film has portrayed is not a Hiroshima haunted by the memory of the bombing, but rather a Hiroshima obsessed with the memory of occupation, the on-going reconstruction, and prewar colonial legacies.