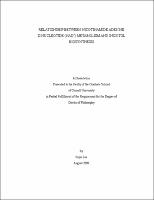 I found that the presence of the phospholipid precursor, inositol, in the growth medium alters NAD+ levels, as well as, expression levels of genes involved in NAD+ metabolism. NAD+ levels increased in the absence of inositol compared to the levels in the presence of inositol. My initial discovery of a relatively weak Ino- phenotype at 37oC associated with the npt1-delta mutant in the NAD+ salvage pathway and the fact that this phenotype is partially suppressed by removal of nicotinic acid (NA) from the growth medium added further evidence of a connection between NAD+ and inositol metabolism. Changes in the level of INO1 expression and phospholipid composition in npt1-delta were restored to wild type levels when NA was removed from the growth medium. The fact that the Ino- phenotype of the npt1-delta mutant was strongest when NA was present was surprising because the npt1-delta mutant is unable to use NA as a precursor for NAD+ biosynthesis. Consistent with the nature of the metabolic defect in the npt1-delta mutant, I subsequently found that the effect of NA on the Ino- phenotype of npt1-delta was not correlated to changes in either intracellular NAD+ or NA levels. Moreover, deletion of the gene encoding the sirutins, Hst1p, in the genetic background, npt1-delta, and/or addition of nicotinamide (NAM), an inhibitor of sirtuins, to the growth medium resulted in a stronger Ino- phenotype. Together these results suggested that the Inophenotype of npt1-delta might be related to changes in phospholipid homeostasis and INO1 expression influenced by exogenous NA as well as, the activity of sirtuins, Sir2p, Hst1p or Hst2p, especially at higher temperatures. Sirtuins are NAD+-dependent protein deacetylases involved in the regulation of a wide ranged of cellular process. Consistently low NAD+ levels in the npt1-delta strain under all conditions tested may result in decreased activity of sirtuins. BNA2 expression level in the npt1-delta strain was highly and transiently increased in the absence of inositol whether NA was present or not. A similar expression pattern was seen in the hst1-delta strain. Hst1p is known as a negative regulator of BNA2 and other genes in de novo pathway for NAD+ synthesis. Hst1p is believed to be recruited to the promoter of these genes where it deacetylates histones, resulting in localized gene silencing. Thus, increased BNA2 expression levels in npt1-delta cells are likely to be due to decreased activity of Hst1p when NAD+ levels are low. Therefore, when Hst1p is inactive, upregulation of BNA2 occurs in response to increasing cellular demand for NAD+. My results further suggest that NAD+ levels or synthesis and/or turnover may be responding to increasing cellular stress, which occurs in the absence of inositol and at higher growth temperatures. In this study, I examined the interaction of inositol biosynthesis and NAD+ metabolism and the effects that these metabolites exert on regulation affecting each other. My data indicate that NAD+ levels and sirtuin activity affect lipid homeostasis and cell viability under conditions of cellular stress created by high temperature and the absence of inositol. These results suggest that sirtuins and NAD+ metabolism play crucial, but previously undescribable roles under conditions of cellular stress.