Mothers Overcoming Barriers Of Poverty: The Significance Of A Relationship With A Credentialed Coach 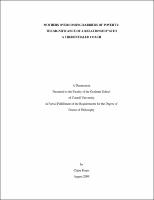 This study examined how 25 randomly selected rural and urban mothers living in poverty in the United States and their 10 Cornell-credentialed workers ("coaches") used healthy mother-coach relationships grounded in the Family Development Credential (FDC) process to identify, address, and resolve societal and personal barriers to family self-reliance. The study looked at (1) barriers mothers encountered and the methods used to overcome them, (2) how mothers and workers perceived the meaning and significance of their relationship, and (3) aspects of this relationship that empowered mothers to pursue goals for a better life. Data from separate mother/coach interviews were developed into "practitioner profiles," then combined into "profile pairs," using a new methodological approach emerging from this study. Initially, mothers' ability to set and pursue goals was limited by personal and environmental factors, including chaos. The study found that the mother-coach relationship appeared to reduce these barriers. One mechanism for this appears to have been supportive, critically reflective dialogue between mothers and coaches, which appears to have been associated with mothers' goal-oriented transformative learning. Recommendations include updates of the FDC curriculum, including new sections on chaos and transformative learning, as well as more explicit critical reflection tools. Development of a funding proposal to investigate the effectiveness of such tools is also recommended. iii