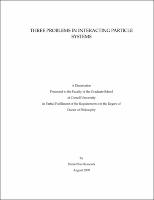 This work consists on the study of three problems in the theory of interacting particle systems. The first and third problems are inspired by problems in ecology, while the second one is inspired by problems in finance and economics. In the first one we study the contact process running on a dynamic random environment on Zd . This can be thought of as model for the spread of an infection on an environment where each sites alternates randomly between being susceptible or blocked for the infection. Our main results are versions of the classical results in the theory of contact processes adapted to our setting. We give a partial description of the set of parameter values for which the process survives or dies out. We also extend the classical block conditions for survival of the process and use them to show that the critical process dies out and that the complete convergence theorem holds in the supercritical case. In the second problem we study limit theorems for a class of individualbased models which are suitable for studying various problems in economics and finance. We prove a law of large numbers and a central limit theorem for the empirical distribution of the process. Interestingly, both the model and the techniques used in the proofs draw inspiration from some work done in ecology and mathematical physics. The third problem is inspired by gypsy moth populations, which present the following interesting feature: they grow until they become sufficiently dense, at which point a large epidemic reduces them to a low level. We model this phenomenon in a discrete time particle system, and we show that the density of occupied sites converges to a dynamical system that presents chaotic behavior for certain parameter values.