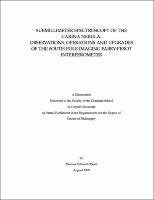 We present the results of a ~ 250 arcmin exp(2) mapping of the 205 mu-m [NII] finestructure line emission over the northern Carina Nebula, including the Car I and Car II HII regions. Spectra were obtained using the South Pole Imaging FabryPerot Interferometer (SPIFI) at the Antarctic Telescope and Remote Observatory (AST/RO) at South Pole. New upgrades and modifications to the SPIFI instrument are discussed, and full details of SPIFI-AST/RO integration and calibration are provided. At the time of these observations, SPIFI had a spectral resolving power of ~ 4250, a FWHM beam size of ~ 54" , and a noise equivalent power (NEP) referred to the front end of the receiver of ~ 2.5 x 10 exp(-15) W Hz exp(-1/2) (~ 1.4 times the background limit). These data constitute the first ground-based detection of the 205 mu-m [NII] line, and only the third detection overall since those of the Cosmic Background Explorer (COBE) Far Infrared Absolute Spectrophotometer (FIRAS) and the Kuiper Airborne Observatory (KAO) in the early 1990s. We supplement the 205 mu-m data with new reductions of far-infrared finestructure spectra from the Infrared Space Observatory (ISO) in 63 mu-m [OI], 122 mu-m [NII], 146 mu-m [OI], and 158 mu-m [CII]; the 146 mu-m [OI] data include 90 raster positions which have not been previously published. Morphological comparisons are made with optical, radio continuum and CO maps. The 122/205 [NII] line ratio is used to probe the density of the low-ionization gas, and the 158/205 [CII]/[NII] line ratio is used to probe the fraction of C+ arising from photodissociation regions (PDRs). The [OI] and [CII] lines are used to construct a PDR model of Carina following Kaufman et al. (1999). When the PDR properties are compared with other sources, Carina is found to be more akin to 30 Doradus than galactic star-forming regions such as Orion, M17, or W49. This is consistent with the view of Carina as a more evolved region, where much of the parent molecular cloud has been ionized or swept away.