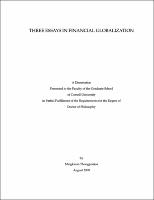 financial globalization has many economic implications for countries. On one hand, it provides protection against national shocks and more efﬁcient global allocation of resources. On the other hand, the financial interlinkage driven by globalization increases the exposure of countries to the financial and real shocks and to the risk of sudden capital reversals. This, in turn, has an impact on countries in various aspects. This dissertation explains the three different roles of financial globalization in individual countries and group of countries. The first essay examines the degree of regional consumption risk sharing of countries in ASEAN+3 and investigates the extent to which financial integration determines the degree of regional consumption risk sharing. There are three main questions that this paper attempts to answer. First, the paper examines whether or not consumption risk sharing exists in ASEAN+3. Second, the paper explores to what directions should they contribute to the degree of regional consumption risk sharing. Finally, this paper examines to what extent ASEAN+3 shares the risk within the region vis-a-vis the rest of the world. According to the a empirical analysis, there is a limited degree of regional and bilateral risk sharing among ASEAN+3 and the degree of such has not changed much during 2000-2007. However, despite the limited degree of regional risk sharing, countries that invest in ASEAN+3 in moderate proportion, that is, Singapore, Korea, and Thailand, tend to have a higher degree of regional consumption risk sharing than global risk sharing. The second essay addresses the major issues of inflation targeting in Thailand. An empirical study shows there is no evidence that inflation targeting has contributed to economic improvement since Thailand does not perform any better, and even worse in terms of output stability, than non inflation targeting countries. Moreover, the results show that exchange rate channel under the transmission mechanism plays a major role which contradicts the traditional inflation targeting, and thus does not fit Thailand's economy. In addition, SVAR indicates that the disinflation is accompanied by declined and volatility in output, suggesting that the adoption of inflation is not free from expenses. Regarding oil price surge, results obtained from SVAR estimation suggest that any active interest policy is able to help relieve the oil price shock and leaving other variables unaffected while having an impact of shorter duration than does inflation targeting. The third essay presents an analysis of the interrelation between financial institutions and the housing sector in the United States. The evidence presented in the first and the second section of the essay suggests that all economic sectors have increasingly participated in financial investment and have been exposed to a higher degree of volatility in financial investment, combining with changes of regulations, and new available instruments, creating the unsustainable boom in U.S. housing markets during the late 1990s to early 2000s, and later resulted in the subprime crisis. The third section sheds light on the dynamics of house price by the panel error correction formulation. The econometric estimation shows the slow adjustment of housing prices towards long-run equilibrium. The last section examines the spill over effects of housing markets to other economic sectors. The estimated results from VECM indicates the strong and statistically significant of all channels of wealth effect, credit effect, and balance sheet effect.