Encyclopedic Aesthetics: Science, Salvation, And Storytelling In The Thirteenth Century 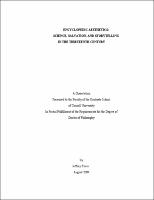 My dissertation, "Encyclopedic Aesthetics: Science, Salvation, and Storytelling in the Thirteenth Century", deals with the idea of the encyclopedia in thirteenth-century vernacular narrative, and is a contribution to the history of secularization. I combine theoretical approaches to genre, literary reception, and political ideology with my philological grounding in Middle High German, Old Norse, and Italian in order to trace the tension between competing encyclopedic discourses (sacred and secular, foreign and native, Christian and pagan, Latin and vernacular) in literary narrative. I demonstrate how secular, vernacular authors invoke the framework of the medieval encyclopedia in order to legitimate the appropriation of heathen scientia for the new, this-worldly ethic of non-clerical audiences. I show how encyclopedism operates as a rhetorical strategy within three distinct political and cultural contexts: the parliamentary Icelandic Commonwealth, the feudal court of Thuringia, and the Italian city-state. The first of four main chapters investigates the merger of imported Christian and native pagan pedagogical traditions in the Edda, the mythographic-poetic treatise of the Icelandic chieftain Snorri Sturluson, as an allegorical negotiation of Icelandic identity under Norwegian hegemony. A second chapter on the Edda relocates the Norse sapiential tradition within the ideology of Snorri's mythographic ethnography. The third chapter reads Dante's dialogue with sacred authority in the Paradiso as a rehabilitation of the "failed encyclopedism" that leads to Adam's spiritual exile -- a mirror of Dante's political exodus. A final chapter on Wolfram von Eschenbach's Parzival and the technology of the book argues that Wolfram inverts the structure of the medieval encyclopedia -- a Christian moral framework for Greco-Arabic science -- in order to recover the world of heathen learning for the lay morality of his Christian audience. I conclude that encyclopedism can no longer be understood as the mere "reception" or insertion of encyclopedic discourses in narrative texts, but should be seen as a new cultural meta-narrative of secular authority framing the explosive development of vernacular literature in a long thirteenth century.