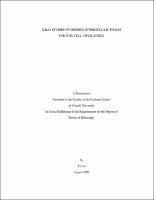 Synchrotron based X-ray techniques in combination with electrochemical methods have been employed to characterize the composition and structure of ordered intermetallic materials in bulk polycrystalline, single crystal and nanoscale forms as electrocatalysts for fuel cell applications. The major objective of this research project is to thoroughly understand the structure/composition/property/activity relationships of these materials and obtain valuable information to guide the design of new electrocatalysts. It is of great importance to characterize ordered intermetallic phases as electrocatalysts since they exhibit excellent electrocatalytic activity towards the oxidation of small organic molecules. In addition, intermetallic phases can serve as model system for the electrocatalyst resaerch, complementing alloy materials and modified single crystal surfaces. In-situ gazing incidence diffraction was applied to characterize polycrystalline PtBi and PtPb intermetallic electrodes in the absence or presence of active fuel molecules in supporting electrolyte. While absence of active fuel molecules, the surface composition and structure of these electrodes were significantly altered as a function of applied upper limit potential (Eulp) while cycling to increasingly positive values. Less noble metals (Bi and Pb) leached out from the matrix. The process resulted that Pt nanocrystal domains were formed on the surface. Instead of cycling the potential, the electrochemical pretreatment of holding the potential reproducibly generated bismuth oxide domains with the diameter of ca. 50 nm on PtBi electrodes. It is surprising that the electrocatalytic activities of different terminations of PtBi electrodes after different electrochemical pretreatments were very similar. This suggests that the activity of PtBi comes from the boundary lines of bismuth oxide and PtBi domains. On the other hand, for PtPb electrodes, no oxidized lead species were formed after similar electrochemical pretreatment. PtBi and PtPb single crystal (100) and (001) facets were prepared by orienting the crystals via back Laue reflection method (BRL). Well-defined Pt domains with 6 fold symmetry but offsetting 23 deg to the (001) directions were produced while cycling the potential to +0.80 V. On the other hand, highly oriented polycrystalline Pt domains with no offset angle to the substrates were formed after similar treatment. Anisotropic activity properties were only observed for PtPb (100) and (001) electrodes towards the formic acid oxidation. X-ray fluorescence (XRF) and X-ray absorption spectroscopic (XAS) methods were utilized to characterize intermetallic nanoparticles. A multi-functional general method was developed to simultaneously obtain XRF and EXAFS data in an in-situ measuring fashion. EXAFS data suggest that bismuth atoms had been essentially oxidized for initial modified electrodes, but the nanoparticles still had the intermetallic crystal structure. Quantitative XRF data suggest the leaching out of bismuth occurred at relatively negative potentials when compared to bulk electrodes.