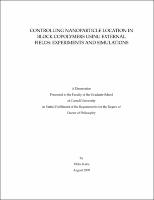 Advances in materials synthesis and fabrication techniques allow an unprecedented control over the creation of novel building blocks such as polymers and particles. The first principle for effective utilization of these building blocks is to create techniques to control their assembly at length scales ranging from nanoscale to macroscopic scale. Hierarchically structured materials have been fabricated by combining the functionalities of block copolymer nanocomposites with the advantages of nanofibers. First, a novel methodology to synthesize block copolymer nanofibers with ordered self assembly has been developed, followed by a systematic study on how this self assembly is altered due to the cylindrical confinement of nanofibers. Then, this self assembly in nanofibers is used as a template to control the spatial distribution of functional nanoparticles. One of the key findings of this work is that a much larger fraction of nanoparticles can be placed (without agglomeration) within nanofibers compared to films of the same materials. To zero in on the mechanism and to understand the thermodynamic and kinetic processes that drive nanoparticle placement in block copolymers during deformation (an important constituent of electrospinning nanofiber fabrication process), coarse grained molecular dynamics simulations have been conducted. Here, the effect of shear flow on different types of block copolymer/nanoparticle systems has been first studied, followed by a study on effect of elongational flow on various block copolymer nanocomposite systems.