After The Politics Of Abstraction: Avant-Garde Art And Criticism In Japan And Brazil Circa 1960 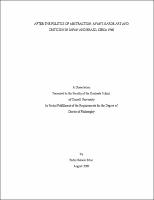 Displacement of the practices and radical theories of avant-garde art from the artistic centers and cultural capitals of North America and Europe to post-Occupation Japan and pre-military dictatorship Brazil since the early 1950s was at the origin of some of the most innovative reflections on the meanings, limits and possibilities of art in the twentieth century. Consciously translating foreign ideas into the social turmoil of their local contexts, avant-garde artists, poets and critics took upon themselves the task of redefining the role of art as a privileged mode of political intervention. The dissertation explores conceptions of the political potential of art and transformations in the modes of social insertion of artistic practices in Brazil and Japan circa 1960. Whereas the political battles of 1950s art were fought mostly in the camp of abstract painting, circa 1960 a young generation of artists breached the physical frame of canvas painting and the institutional frame of art in favor of more immediate modes of social insertion of artistic practice. By conceiving of the spectator of art no longer as a receptor of stimuli, but rather as an active, participating subject, artists such as Lygia Clark, Helio Oiticica and Akasegawa Genpei undermined the paradigm of aesthetic contemplation, and opened the way for new modes of political intervention through art. After the waning of the postwar avant-gardes, the radical possibilities they revealed remained decisive for artistic practice in the ensuing decades. This study follows the traces of a certain discursive continuity, which crosses the borders of these two disparate realms of avant-garde art. The first chapter explores the ostensible fractures and some often misleading similarities between the discourse of avant-garde art in postwar Brazil and Japan, and elaborates on the meanings of what I call their fundamental contemporaneity. Each of the following chapters focuses on a different moment of this history through the exploration of the works of one or more individuals; their sequence coincides in part with the general chronology of events, but their division is primarily a function of the logical order of the argument.