Flying In The Face Of Efficiency: Migratory Swallows (Hirundinidae) Have Less Pointed Wings Than Residents 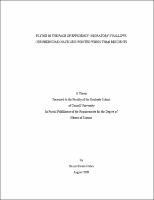 The correlation between migration and more pointed wings is a well-established pattern in avian ecomorphology, and has been supported by a large number of studies over many decades. However, most studies have focused on taxa with relatively low aspect ratio wings, and taxa with high aspect ratio wings have scarcely been investigated except as part of large pooled datasets. While some authors have questioned whether the pattern is detectable in all taxa, the basic assumption that migrants have more pointed or similar wings compared to residents -- depending on the strength of selection -- has not been questioned. This study examines the correlation between migration and more pointed wings in swallows (Hirundinidae), a family with relatively high aspect ratio wings. Using phylogenetically controlled statistical methods and a well-established index of wing pointedness, I investigated the wing shape of species pairs from eight swallow genera. The present study establishes that among swallows, migratory species have less pointed wings than sedentary species, and that wing pointedness declines linearly with increasing migration distance. This study represents the first published result demonstrating a reversal of the correlation between migration and more pointed wings found in other avian taxa. Hypotheses to account for this unprecedented finding and implications for future research are discussed.