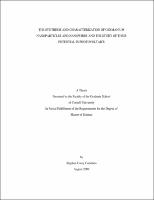 The increasing energy demand of an overpopulated society has bolstered the interest in exploring renewable energy forms, one of which is solar energy. Current solar cell technology is neither an efficient nor cost-effective alternative to currently used fossil fuels. Nanostructured semiconductor building blocks are expected to play a central role in the development of next-generation cost-effective solar cell technology. Among the various materials that have been explored and studied, Ge holds particular promise due to it favorable band gap and good transport characteristic. A method to produce colloidal Ge nanocrystals, however, has not yet been established. Colloidal synthesis provides a scalable and cost-effective route to nanocrystalline semiconductor material as building blocks in low-cost PV energy conversion devices. This work describes the synthesis and characterization of Ge nanoparticles and Ge nanowires and their potential applications. Ge nanoparticles, 1.9 - 16.0 nm, are synthesized via colloidal synthesis by reducing germanium iodide using a strong reducing agent in various coordinating solvents. The effects of reaction and injection temperature, reaction time, and initial concentration are studied. A minimum temperature of 250 degree C is required to crystallize Ge in a colloidal synthesis, below which only amorphous material is formed. An increase in reaction temperature from 250 to 300 degree C has little effect on the final nanocrystal size and structure. A temperature of 200 degree C was found to minimize crystal growth defects. Increasing or decreasing the injection temperature increased the crystal defects. The final crystalline products are analyzed using XRD, FTIR, TEM, HR-TEM, SEM, UV-vis spectroscopy, and PL to study oxidation, crystal structure, and optical properties. Spin coated germanium nanoparticles are combined with sputtered a-Si to create a polysilicon-Ge matrix which could direct charge transfer and decrease recombination of photogenerated charges. As a complementary nanocrystalline Ge building block nanowires were also synthesized by the thermal decomposition of DPG and TMG in supercritical hexane using a batch and a semicontinuous supercritical reactor. Up to 210 mg are synthesized and collected using this process with a diameter range of 20 nm to 60 nm and lengths up to 15 mu-m. The continuously grown nanowire experimental yield is ~35%, compared to the batch experimental yield of 15%. The Ge nanowires were easily extracted from the collection vessel and characterized using TEM, SEM, and XRD to confirm the presence of Ge and to study the structure of the wires.