Automation And Its Impact On Women Assemblers In Malaysian Factories 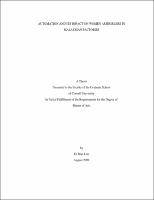 Much has been written about the deskilling impact of technology on factory workers, especially since the publication of Harry Braverman's Labor and Monopoly Capital: The Degradation of Work in the Twentieth Century. This paper seeks to complicate the simplistic notion that technological advances in factories deskill workers. Focusing on women assemblers who were employed in large numbers in the 1980s in Malaysian factories for their alleged "feminine skills", such as manual dexterity, and low labor costs, this paper argues that technological changes do not deskill women workers per se. Rather, these changes require new skills. As such, some women are able to find better employment in, for instance, clerical and managerial occupations. Others, however, lose out when changes are implemented because employers no longer associate these new skills, such as numeracy and literacy, with women. With these changes, they have to compete with men, resulting in the decreased proportion of women assemblers and a lowering of women's wages. It is also observed that some women move out of the formal labor force into casual work as companies outsource to home-workers to reduce production costs. As such, despite the observation that technology does not deskill per se, women workers bear the negative consequences of technological changes.