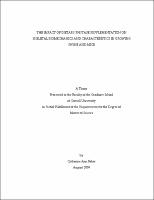 The misconception that bone is a static tissue underestimates its importance in human and animal health, as well as the many factors that influence its development and maintenance. Genetic, hormonal, mechanical and nutritional factors all influence bone strength and mass, particularly in early life. Musculoskeletal diseases, such as osteochondrosis and osteoporosis, are debilitating to humans and animals and create a substantial financial burden on the country's health care system and food animal production industries. Efforts to discover strategies for the prevention and management of musculoskeletal diseases have become a major area of research. Our research examined the impact of nutritional supplementation on bone strength and mass as a means to improve bone integrity early in life and reduce the susceptibility of the skeleton to musculoskeletal diseases. Phytase, an acid phosphatase, was the primary dietary supplement examined because it improves bone strength in swine, broiler chicks and rats fed a phosphorus deficient diet. We were interested in the ability of phytase to improve bone strength in young animals through a non-phosphorus mechanism. Therefore, we conducted a series of feeding trials in swine (Yorkshire x Hampshire x Laundrace) and mice (129/SVJ x C57BL/6 line) fed phosphorus adequate diets. In addition, two other bone-impacting dietary supplements, inulin and strontium, were examined as well. These two additional supplements were examined with phytase because studies have suggested that they might have an additive effect and further improve bone strength and mass when supplemented with phytase. In swine, phytase supplementation for 5 weeks in a nutrient adequate diet increased (p less than 0.05) femur bending rigidity and mineral content. When phytase was supplemented in the diet with inulin or strontium, no significant impact on skeletal tissue was observed. Dietary inulin supplementation alone for 5 weeks altered (p less than 0.05) the ellipticity index of femurs and dietary strontium supplementation alone for 10 weeks increased (p less than 0.05) femur mineral density. In the mouse, we did not observe an impact of phytase supplementation on skeletal functional parameter, such as femur breaking strength or bending rigidity, when its substrate, phytate, was absent from the nutrient adequate diet. Superoxide dismutase knockout mice (SOD1 -/-; Cu, Zn-SOD; EC 1.15.1.1) provided an animal model with a compromised skeletal system. Phytase supplementation was not effective in improving breaking strength or bending rigidity in this model. Our results suggest that phytase supplementation has some beneficial effects on bone breaking strength early in development when supplemented in a diet with its native substrate. Phytase supplemented with either inulin or strontium did not provide any additional benefit on bone parameters examined in these studies.