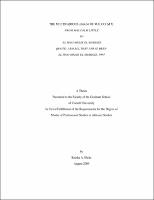 Malcolm X is one of the most iconoclastic persons in the African American political and intellectual traditions. The challenge in performing the research for this thesis, was to find a way to examine the life of Malcolm X that is different from the scholarly work published to date. I contemplated on what might be the most impactful Islamic concept that has influenced American dominant culture during the past twenty years. The critical lens I chose to utilize is the Islamic cultural practice of Jihad. The attraction for me was juxtaposing various concepts of Jihad, which is most closely aligned with the manifestations of Malcolm X's faith as a Muslim. By using Jihad as my critical lens for analyzing his life and speeches I hope to present an even greater appreciation for Malcolm X as a person of deep faith. The forms of Jihad I will apply for contextual analysis are Jihad bin Nafs {Jihad of the Heart}, Jihad bil Lisan {Jihad of the Tongue}, and Jihad bin Yad {Jihad of Action}. Having read the Autobiography several times at different stages during my academic career I thought I had gained a good understanding of Malcolm X's life. However, reading his published documents, interviews, and carefully studying his speeches I was exposed to him as an extraordinary public personality. I have determined that Malcolm X was one of the most compelling Black public intellectuals of the twentieth century.