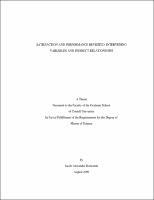 The role of employee satisfaction in the human resources literature is one that is long-lived and, while theoretical rationales explaining why satisfaction may influence firm performance abound, little convincing evidence of a strong connection between these constructs exists. The current study suggests one plausible, and in this case, empirically substantiated possibility, namely that the relationship between these constructs can be "purely" indirect. By examining the influence of unit-level employee satisfaction on financial performance in the presence of other theoretically (and organizationally) relevant intervening variables -- employee responsiveness, retention, and customer satisfaction -- a model was proposed that exhibited remarkably good fit to the data and indicated that the path from satisfaction to performance was indirect as opposed to mediated. Further, proximity effects resulting from causal distance were found.