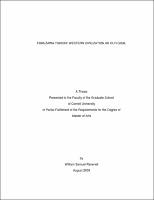 This paper begins by analyzing how Fukuzawa Yukichi (1835-1901) imagined the west in order to fulfill his dream of implementing western civilization and its manners, vein, and modus operandi into Japanese society. The first chapter discusses how Fukuzawa sought to resolve Japan's dilemma caused by the encroachment of western nations into Asia during the 19th century. The purpose of volume one: chapter one is to carefully outline Fukuzawa's interior motives for seeking to implement western civilization's mind set, industrial and social infrastructure into Japan, the pressures in the outside world that galvanized his will to succeed, and finally the salient features of the catalyst he sought in order to cause a metamorphosis in Japanese society. Next, it considers the vision Fukuzawa held for Japan and juxtaposes that vision against the type of nation that Japan became in the early 20th century. Fukuzawa was vehement in his belief that the key to Japan's independence rested within western civilization. Volume one: chapter two takes a critical look at western civilization, questions the definition, challenges the assumption that it was refined, and examines how the overzealous attitude Fukuzawa displayed in his quest to understand and marshal it steered Japan toward a path of Imperialism rather than true civilization. Volume two explores Imperial Japan engaging in colonialism. Using the experience of Koreans who suffered under the yoke of Japanese colonial rule as a backdrop, it provides details on how Japan eventually succumbed to implementing the barbarous tendencies of the west in their own foreign policy on account of their emulation of western civilization.