Haruhi In Usa: A Case Study Of A Japanese Anime In The United States 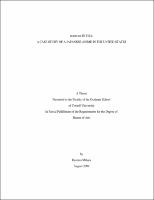 Although it has been more than a decade since Japanese anime became a popular topic of conversation when discussing Japan, both within the United States and in other countries as well, few studies have empirically investigated how, and by whom, anime has been treated and consumed outside of Japan. This research thus tries to provide one possible answer to the following set of questions: What is the empirical transnationality of anime? How and by whom is anime made transnational? How is anime transnationally localized/consumed? In order to answer the questions, I investigated the trans-pacific licensing, localizing, and consuming process of the anime The Melancholy of Haruhi Suzumiya (Haruhi) from Japan to the United States by conducting fieldwork in the United States' agencies which localized Haruhi as well as U.S. anime and Haruhi fans. The central focus of this research is the ethnography of agencies surrounding Haruhi in the United States and Japan. I assume that these agencies form a community with a distinctive culture and principles of behaviors and practices in the handling of the Haruhi anime texts. The research findings to the above questions could be briefly summarized as follows. The worldview, characters, and settings of Haruhi (i.e. a fictious world of Haruhi which is embodied and described through its anime episodes and other related products) "reduces" and "diffuses" as it is transferred on the official business track from the producers in Japan to the localizers in the United States (i.e. considerable number of Haruhi-related products are not licensed by Japan and therefore are not officially available in the United States; also, many clues and elements embedded in the anime, which suggest the creators' intentions, were not translated in the U.S. version of Haruhi anime, etc.) but it is considerably supplemented on the unofficial (and illegal) track of fan activities mainly taking place on the Internet (i.e. the considerable amount of the contents of the non-licensed Haruhi products are voluntarily translated into English by Haruhi fans and uploaded on websites, considerable amount of un-translated clues and elements are explained on the Englishbased Haruhi fansites, etc.). This further suggests that the base-structure of the anime business is still weak and immature in the United States and that the Internet functions as the supplemental infrastructure of the trans-pacific anime process from Japan to the United States. The worldview of Haruhi is introduced reductively and diffusively to the United States because there are insufficient platforms for the Haruhi-related products to be transplanted to the United States and because there are insufficient capacities for the U.S. Haruhi localizers to pick up and translate all the clues and elements in the original Haruhi anime. In addition to the on-line fan activities that aim to supplement the missing parts of the worldview of Haruhi, the localizers in the United States also depend on the Internet when promoting Haruhi business in the United States, both in the B to C phase (such as Haruhi promotion in the United States which was conducted almost exclusively on the Internet) and the B to B phase (such as the prospective U.S. distributors' watching Haruhi anime on Youtube after its air in Japan and before offering the U.S. distribution contract to the rights holders in Japan). Although these findings from the case study of one anime in one country cannot be generalized to all anime in all countries, I believe it reveals the essence of the transnationality of anime, since the basic localizing processes of anime are more or less the same in most anime in most countries.