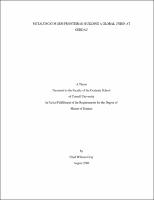 This thesis is a case study of a cross-border network of labor unions at the Brazilian steel company, Gerdau. In the thesis I trace the ten-year development of this union network from its informal origins to a to a more comprehensive model of global unionism. Finally, I identify four key functions of cross-border networks: coalitions, campaigns, capacity building, and contracts. I hypothesize that each of these functions addresses a specific challenge to building and expanding bargaining power at multinational corporations (MNCs). The thesis concludes that unions will need to make long-term commitments to deepening cross-border activity in each of these four areas in order to build bargaining power. The Gerdau network began with a series of informal exchanges between North American and Brazilian trade unionists between 1998 and 2003. These exchanges began a process of information sharing and trust building between unions setting the foundation for more comprehensive cross-border activity as the network expanded. In 2005, Gerdau Ameristeel locked out 270 United Steelworkers (USW) members in Beaumont, Texas. Between 2005-2007, the USW worked with allies in North America, South America, and Europe to build a broad comprehensive global campaign to end the lockout and ensure that all its North American union locations were under contracts. In 2006 eleven unions representing workers at Gerdau globally formed the Gerdau Workers' World Council (GWWC). The GWWC was designed to be a more formal body for information sharing, coordinated activity and decision-making amongst Gerdau unions. These unions have made a long-term commitment to further cross-border collaboration with the goal of signing an International Framework Agreement (IFA) with Gerdau management.