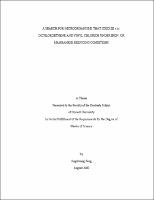 Lesser chlorinated ethenes, cis-dichloroethene (cDCE) and vinyl chloride (VC) are reductive dechlorination products of tetrachloroethene and trichloroethene which are among the most-abundant groundwater contaminants in the United States. Due to their ubiquitous and potentially carcinogenic nature, cDCE and VC have been classified as priority pollutants by the United States Environmental Protection Agency. Through two decades of field study and laboratory research, chlorinated ethenes are found subject to a range of microbial degradation processes, including reductive dechlorination, aerobic oxidation, aerobic cometabolism and anaerobic oxidation. Among these biodegradation mechanisms, anaerobic oxidation of cDCE and VC is the most recently recognized neither anaerobic chloroethene oxidizing microorganisms nor the pathways involved in these processes have been identified yet. Therefore, acquiring enrichment cultures capable of anaerobically oxidizing cDCE and VC and identifying the mediating organisms is prerequisite to eventual development of molecular biological tools to evaluate the in situ presence of such microorganisms. Microcosm studies on anaerobic oxidation of cDCE and VC under Fe(III)- and Mn(IV)-reducing conditions were conducted in this research. In all, 21 series of microcosms (approximately 350 in total) were prepared, covering 17 sampling locations from 9 chloroethene-contaminated sites or sources throughout the United States, including those where cDCE or VC mineralization under metal-reducing conditions was supposedly observed by previous investigators, or where Fe(III)reduction is the predominant terminal electron-accepting process. Microcosms were constructed using a variety of site materials, such as aquifer sediments, streambed sediments, soil, groundwater, sludge supernatant, and column contents constructed with tree mulch, cotton gin trash, and river sand. A small amount of yeast extract, along with excess Fe(III) or Mn(IV), was used to rapidly establish metal-reducing conditions, after which the yeast extract would be depleted and cDCE or VC thereafter would serve as the main electron donors. Change of chloroethenes and accumulation of Fe(II) or Mn(II) in the microcosms were monitored periodically via headspacesampling/gas-chromatography and a wet-chemistry assay, respectively. Through a one-and-one-half-year experimental period, anaerobic oxidation of cDCE or VC was not detected in any of the 350 microcosms. No loss of cDCE or VC was detected in 8 series of microcosms, while reductive dechlorination was observed to various degrees in other series, three of which showed complete reductive dechlorination to ethene followed by further reduction of ethene to ethane. Most microcosms that exhibited reductive dechlorination were those unamended with Fe(III) or Mn(IV), but robust reductive dechlorination was also observed in Fe(III)-amended microcosms constructed with organic-rich materials from two sites. The failure to observe anaerobic cDCE or VC oxidation gave rise to a hypothesis that the ostensibly anaerobic cDCE or VC oxidation observed at some sites or in some laboratory studies might, in fact, have been aerobic oxidation carried out under very low fluxes of oxygen. This hypothesis was based on the low oxygen thresholds previously reported for isolated aerobic VC-oxidizers and on the occurrence of oxygen-contamination reported by other research teams attempting to investigate anaerobic mineralization of cDCE and VC. Therefore, we conducted a subsequent aerobic experiment in which oxygen was added to 16 previously anaerobic microcosms to find out if aerobic cDCE or VC oxidation would occur readily in microcosms that had previously been incubated anaerobically for an extended period. After about 40 days of aerobic incubation, three aerobic VC-oxidizing mixed cultures were obtained. Future study is thus warranted to investigate whether aerobic VC mineralization can occur in simulated mixed-culture subsurface environments that are subject to steady influx of oxygen but maintained at extremely low oxygen concentrations.