Dedications And The Reception Of The Musical Score, 1785-1850 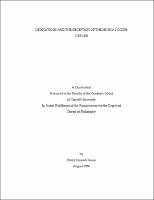 In the late eighteenth century, composers began dedicating works decreasingly to patrons and increasingly to their peers. The text announcing this new kind of offering, printed prominently on the title page, functioned simultaneously in a variety of ways, each affecting the reception of works in an age in which an expanding print culture connected composers to a new and growing musically literate public. Revising traditional views of the intention and function of dedications between composers, I argue that such paratexts, or fragments of text attached to the published score, were not simply respectful gestures of homage; they also operated as advertisements, as gifts requiring reciprocation, and as gestures towards biography and allusion. Drawing on theories of gift exchange, Chapter 1 argues that dedications afforded both dedicator and dedicatee gains in tangible and symbolic capital. Chapter 2 examines dedicatory epistles and advertisements in order to illustrate that dedicatees' names functioned promotionally for the works to which they were attached. Chapter 3 argues that the salutatory phrases attached to many dedications, such as "to my friend x" or "from his friend y," were, like contemporary composer biographies, interested in proving the credibility of composers by publicly showing them to be associated with their peers. Finally, Chapter 4 suggests that composer-to-composer dedications invited readers to perceive allusions between the works of dedicator and dedicatee. In fact, dedications can be linked to a body of musical works popular at this time that explicitly referenced multiple authors; arrangements, transcriptions, and paraphrases all have title pages that boast connections to more than one composer, creating the impression that the works in question were not the product of a singular creative mind. Chapter 4, then, provides a paradigm for understanding the construction of multiple authorship by contemporaneous print culture. The dissertation also contains two appendices intended to be scholarly resources: Appendix A gives the texts and translations for all cited dedicatory epistles between 1780 and 1810, while Appendix B makes available a database of approximately three hundred composer-to-composer dedications published from 1700 to 1850.