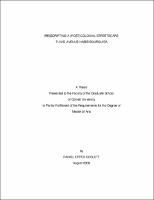 The retrospective or "neo-colonial" 2000-2001 renovation of Tunis' Avenue Habib Bourguiba is a compelling example of spatial scripting that recalls an environment first engineered by influential French ex-patriots in the 1860's. Spatial scripting, in this case, describes the intentional layering of meaning upon the streetscape, the visual and performative narration of a story, and the casting of space as an emblem that both informs and illustrates, but also controls and defines within its greater socio-cultural context. On the ground it facilitates both a physical and figurative journey. In the case of this particular renovation, the expansion of sidewalks, installation of cafe terraces and new monumental structures, the preservation of colonialist buildings as well as the selection of vaguely traditional European styles of architecture, are highly symbolic gestures. They contribute to the generation of revenue on the street, the composition of an urban and national identity and the image of Tunis for foreign audiences. These acts place Tunis outside the traditional conception of postcolonial urbanism that assumes an opposition to colonial legacies, but well within the realm of top-down scripted urban theming or branding; concepts generally considered to be western and relatively postmodern in origin and practice. Thorough investigation into the complex history of this highly coded streetscape demonstrates that this type of environmental storytelling is not a new phenomenon in Tunis; rather it has been occurring since French colonialists first defined the Avenue's course a century-and-a-half ago. Expressive of the ideals espoused by an empowered few -- European businessmen, consuls, colonial administrators and independent Tunisian regimes -- the site reflects their attempts to not only manage the city's form, but also mold the identities of its users and present themselves collectively to the world at large. It is the physical manifestation of an imagined Tunisois community. The following essay outlines the particular modifications made to the streetscape in the composition of a legible urban icon and indicator of Tunisia's various European, Parisian, Islamic, modern, cosmopolitan and independent socio-political and cultural faces. Factors such as transportation, tourism, international trade, domestic security and linguistics shall be considered in addition to architectural styles, planning practices, historic preservation and academic culture, as all are crucial components of the Avenue's scripted nature. The general marginalization of Tunis within postcolonial and postmodern studies, the persistence of narrow conceptions of postcolonial urbanism and spatial scripting, as well as major impending changes to the greater city, make this work both appropriate and timely. Drawn from a wide array of historical and contemporary primary and secondary source material, ephemera and personal observation, the essay brings the city into the ongoing scholarly discourse and challenges the predominance of Algiers and Casablanca as unrivaled representatives of French colonial and postcolonial experiences in North Africa. It furthermore presents a nearly complete and well-documented portrait of the historical street, effectively captures the current state of the Avenue, and ultimately lays the foundation for further analysis that may incorporate additional material from the perspective of the Tunisian user, past and present.