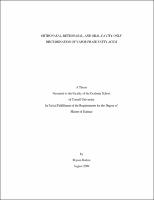 The effectiveness of linoleic, oleic, and stearic acids, per se, as odorants has not been clearly established. Chale-Rush and others (2007) reported detection thresholds for complex mixtures containing these fatty acids, with the stearic acid mixture at 67-69 degree C. Tamburrino and Halpern (2007) suggested that these fatty acids can not be easily identified by orthonasal or retronasal smelling. The objectives of the first study were to create an effective modified odorant delivery container (MODC) for orthonasal presentations that would limit unwanted aroma loss while the container is idle, and to validate the use of the MODC for discrimination testing methodology using food extracts that were known to be effective odorants (orange, strawberry, and peppermint) so that the MODC could be used for future studies. The objectives for the second and third studies were to determine if linoleic, oleic, and stearic acid could be discriminated against an odorless sample when presented orthonasally, retronasally, and oral-cavity-only (OCO). With an n = 30, the results from the first study showed an extremely high correct discrimination response of 97%, which demonstrated that the MODC was suitable for orthonasal odorant delivery in discrimination studies. With an n = 30, the results from the second study suggested that the three fatty acids tested were significantly different from an odorless sample when presented orthonasally and retronasally. With an n = 30, linoleic acid when presented OCO appeared to not be discriminable from an odorless sample, but there was not enough evidence to suggest that oleic and stearic acids were or were not significantly different from an odorless sample when presented OCO. With a greater sample size, oleic and stearic acid responses might yield significant results for OCO. These findings suggest that these vapor phase fatty acids can stimulate the receptors in the nasal cavity. However, linoleic acid does not stimulate the trigeminal receptor neurons in the oral cavity. It is inconclusive if oleic acid and stearic acid are oral cavity trigeminal stimulants.