The Real Vermonter: The Use Of Myth In Summer Home Promotion And Rural Reform In Vermont, 1890-1940 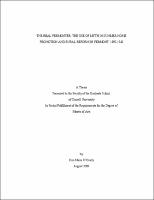 From the 1890s through the 1930s, the Board of Agriculture and Bureau of Publicity in the state of Vermont released many publications promoting the state as a summer home destination. The salability of native Vermonters, a unique and enticing feature of life in the Green Mountains, was an integral component of this promotional literature. The following thesis explores this myth of the Real Vermonter, defining the myth itself as described in promotional and popular literature, examining its historic precedence and the implications of its uses in the early twentieth-century by state agencies as a tool for improving rural communities through summer home development. In order to lay the groundwork for an understanding of the use of myth in state promotion, the study begins with an examination of the Vermont during the nineteenth century. The changes occurring with the state are highlighted, including the evolving agricultural industry and burgeoning tourism industry, the growth of immigrant populations, and the steady loss of native-born residents contributing to the decline of many rural communities. Upon this foundation, the myth of the Real Vermonter is explored through a study of primary documents, ranging from pamphlets to newspaper articles and political speeches. Real Vermonters are defined in a simplistic and romanticized way as independent, Protestant, Republican, hardworking and honest farmers in the old-line American tradition, an appealing portrayal for potential vacationers. Once the myth is defined, its role in rural reform movements is examined, largely through the literature of the Eugenics Survey of Vermont and the Vermont Commission on Country, two initiatives that sought to protect and improve the life of desirable native rural Vermonters while alienating many immigrant groups, particularly the French Canadian farmers. Summer residents, mainly middle-class professionals, artists, writers and teachers, were encouraged to move to Vermont and set up summer homes, clean up the landscape with their neatly kept farmhouses, patronize local businesses, and be good role models for downtrodden locals. An exploration of non-fiction novels and personal accounts by both native Vermonters and summer residents provides insight into the impacts part-time residents had on locals, how their presence helped support rural institutions and businesses while simultaneously fostering tenuous relationships between native and newcomer. Ultimately, the myth of the Real Vermonter is shown to be a major feature in promotion of summer homes and the growth of summer colonies and a powerful component in shaping the perception of Vermont for both natives and outsiders. The impact of its use yielded both positive and negative results in rural communities. On one hand, the social fabric of rural communities and a sense of personal ownership by locals over their land and homes may have been undermined, and ethnic tensions intensified, by the use of the myth. On the other hand, a sense of tradition and continuity was established, ensuring the protection of historic and scenic landscapes and agricultural pursuits in Vermont. The myth of the Real Vermonter was used as a tool to promote social change and preserve tradition in Vermont, and it has helped shape the nature of rural communities throughout the state for well over a century.