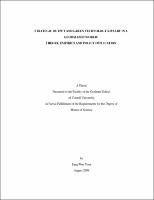 The concerns over deteriorating global climate change have been leading to the creation of several global initiatives, such as the Climate Change Convention and Kyoto Protocol. However, the effects of those globally coordinated initiatives have been doubted since their advent, and research on the effectiveness of those efforts has been a focus of global attention. The purpose of this paper is to examine the nature of the commons that arise from climate changes, and investigate to what extent current market incentives perform to reduce the emission of greenhouse gases. The paper empirically assesses the factors and conditions that affect the market incentives in the current environment, and intends to provide an insight into the future international scheme for coordinated efforts. The basic premise of the paper is that the development of technology to stop global warming can serve as an incentive in and of itself. We develop this technology driven approach in the framework of an open economy in which there exists strong domestic political pressure for economic growth. This paper begins by examining the needs to develop technology for the reduction of carbon emissions. Following this discussion the paper presents a theoretical model to examine if the desire for growth through international trade encourages investment in technology, and examines how this induced level of investment relates to the globally efficient level of investment. Finally, the paper empirically investigates some of the determinants of technology investment using cross country panel data over time. In our theoretical model we derive propositions that the level of technology depends on the degree of openness, the cost of developing green technology and the importance which a country places on material growth and a clean environment (the weights associated with these items in a country's welfare function). Through our empirical studies, we first examine the potential explanatory variables that affect both welfare weights and technology development cost, and then choose the level of income, unemployment rate, degree of openness, number of ratified major environmental conventions, degree of democracy and regional peer effect as a set of important socio-economic explanatory variables that influence the level of technology. Our theoretical derivations suggest that the degree of openness has a positive effect on stimulating investment in clean technology, while factors affecting the welfare weight on material progress are likely to have a negative effect. The factors affecting the development costs also need careful attention. We can summarize our empirical findings as follows. First, we find the degree of openness is related to the degree of the green technology development. We find that countries that have been under high growth pressure do not necessarily confirm this relationship. However, when we consider the different openness measurement, the Sachs and Warner openness measure, it seems that degree of openness is positively related to the development of green technology.. Second, we find that unemployment rate has negative influence on developing green technology and the degree of influence depends on the stage of economic development. Third, we find that the degree of democracy has different effect on developing green technology for countries with different level of income. For example, we find that the degree of democracy for high income countries has a negative effect on the technology investment. However, in highly developing countries, we find positive effects. Fourth, we show that there are regional peer efforts on developing the green technology in certain regions. For instance, we find that the European region with shared cultural heritage shows a positive peer effect on developing the green technology. However, we find the opposite effect for the North American Region. Fifth, we find that two most recent conventions such as the UNFCCC and the Kyoto protocol have positive effects on developing the technology. This implies that the exogenously given welfare weight on environment through the major convention dummies that countries have signed and ratified affects the development of technology in a positive way. Finally, the policy implications from our examinations are not straightforward. In the absence of coordinated efforts, each country has different incentives for the investment in clean technology and the incentive compatible mechanism to allocate the burden of developing world optimum technology would be extremely difficult. Those countries with certain favorable characteristics with the high degree of openness, low development cost and greater revealed preference for clean environment may lead the investment while the rest of the world follows leaders' initiatives. These propositions however need further scrutiny and research in the future.