Determinants Of Endowment Spending Rates At Institutions Of Higher Education 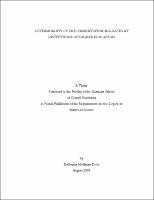