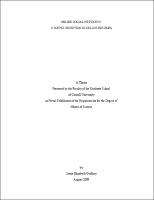 This study explores the way that social networking websites (SNS) shape individuals' patterns of deception in online resumes. We argue that because specific features of SNS, such as the ability for individuals in the social network to view profile information, connect the virtual and actual self (Walther & Parks, 2002) the costliness of deception increases (Donath, 1999). We tested this prediction in the context of online resumes constructed on the SNS Linkedin.com. Participants (N = 123) in a between-subjects experiment created profiles in four self-presentational settings: a traditional (offline) resume, a private SNS profile, a public SNS profile, a private SNS profile with specific social network information and a public SNS profile with specific social network information. Findings suggest that frequency of deceptive acts did not differ between offline, private and public SNS profile conditions, although these conditions affected types of deception that people use in resumes. Individuals tended to lie more about interests in public SNS resumes than in private SNS and traditional resumes. The results are discussed in terms of warranting (Walther & Parks, 2002) and the costliness of deception (Donath, 1999).