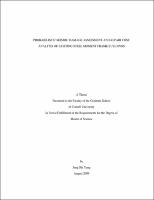 The purpose of seismic reliability analysis of existing building is to estimate the probable damage due to future earthquakes and to retrofit these building for improved performance. Earthquake damage to buildings depends not only on structural model but also on the characteristics of earthquake ground motion such as duration, frequency, peak ground motion, and number of occurrences. These characteristics are considered as random. Thus, stochastic processes are used to describe earthquake occurrence, ground motions, and failure. An existing eight-story steel moment frame building located in Los Angeles, California is chosen as a case study to illustrate the application of the stochastic methods. To evaluate the seismic reliability of the building, a large number of ground motions are generated that represent possible future earthquakes in the region. Earthquake ground motion is modeled as a Gaussian process based on recorded accelerogram of the 1994 Northridge earthquake. Under the ground motions generated, the response samples of the building are obtained by dynamic analysis method. For the purpose of the seismic vulnerability analysis, failure rate analysis is performed to estimate the probability of exceedance of peak building response measured by peak interstory drift and floor acceleration. Besides, to develop fragility curves, incremental dynamic analysis (IDA) is performed which is a parametric analysis method to estimate structural performance under earthquake ground motions scaled to several levels of intensity measures such as first mode spectral displacement and acceleration. From IDA results, fragility curves are developed which show the conditional probability of reaching or exceeding a particular damage state as a function of ground motion intensity measure. Fragility curves are then represented by lognormal distribution functions with two parameters. Because the damage in terms of monetary loss provides more meaningful measure of economic impacts of earthquakes, seismic damage to the building is evaluated in terms of dollar value. Using the fragility curves, direct economic cost functions are developed to estimate economic losses as a function of ground motion intensity measure. In order to illustrate the use of the direct economic cost functions for finding an optimal retrofit option, braced frames are designed by placing bracing elements to the existing moment frames. Although several retrofit options should be considered to find an optimal alternative, this study focuses on the concentrically braced steel frame system. The exceedance probabilities of the overall direct economic cost of the two structural systems are compared to make a decision which structural system is superior.