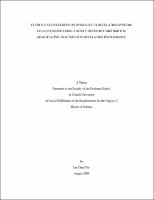 Gravity driven hydraulic flocculators that operate in the absence of reliable electric power are better suited to meet the water treatment needs of communities in the global south than conventional mechanical flocculators. However, current knowledge regarding the proper design and operation of hydraulic flocculation systems is insufficient. Of particular interest to the AguaClara research team is the optimal fluid shear level needed to produce low turbidity water. The Flocculation Residual Turbidity Analyzer (FReTA) was developed as tool for measuring the floc sedimentation velocity distribution and the post-sedimentation residual turbidity of a flocculated suspension. These two properties are central to the design and operation of unit processes following flocculation in a water treatment plant. FReTA measures the turbidity of a flocculent suspension undergoing quiescent sedimentation. The fixed distance across which flocs must travel to clear the measurement volume in FReTA allows sedimentation velocities to be calculated from the raw turbidity data. By fitting the transformed turbidity data with a modified gamma distribution, the mean and variance of the sedimentation velocity distribution can be obtained along with the post-sedimentation residual turbidity. A hydraulic tube flocculator was used to study how fluid shear levels affect the settling properties of a flocculated alum-kaolin suspension. FReTA was employed to quantitatively compare the effects of varying fluid shear and hydraulic residence time on the sedimentation velocity distributions and the post-sedimentation residual turbidities of flocculated suspensions formed in the tube flocculator. Results showed that shear induced floc break up occurred at all velocity gradients evaluated. There was a correlation between high floc settling velocities and low residual turbidities, both of which were optimized at low fluid shear levels and long fluid residence times. This study showed that, for hydraulic flocculation systems, low turbidity water was produced when fluid shear was kept at a minimum.