Seeds Of Modernization: Conflicting Roles Of Agriculture As The Core Development And Growth Strategy In Senegal 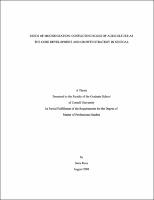 Modern development strategies, as defined by the World Bank, IMF, and other leading financial institutions, perceive agriculture as a viable source of economic growth in developing countries. However, in countries like Senegal which suffer from declining environmental conditions, agriculture is not a sustainable solution for economic growth. Growth in industrial activity during the colonial era and in the decades following independence have affected rain patterns, soil quality, and water salinity in the Sahel region, making it unsuitable for continued mass production of colonial crops like cotton, groundnuts, and maize. As a result, economic growth has been challenging, and domestic food security has become a major concern. Indigenous knowledge of farming practices could be a solution to these problems by leveraging tradition and local understanding of the environment. Other industries like manufacturing and IT services could also be explored as alternative sources of growth for the economy. However, the more common strategy has been to continue focusing on agriculture and using more fertilizers, pesticides, hybrid seeds, and in some cases, genetically modified seeds to boost agricultural production and thus meet development goals. Not only is the use of these products harmful to the environment and potentially to people who consume the products, but it is also harmful to the economy. Since most of these products are privatized and patented, traditional farmers are forced to purchase seed and other agricultural products every year from private corporations. Even though many times the increased agricultural production does positively affect the GDP, a major indicator of economic growth to development agencies, more and more farmers are finding themselves in debt. Therefore, the perceived success of these development programs is at the expense of the livelihood of local farmers, who continue to experience a sub-par quality of life. This thesis challenges the notion of development, especially as it relates to the African experience of capitalism. Agriculture, as a main vehicle of colonial expansion in Africa and many other places in the world, provides an interesting lens into the fundamental assumptions of capitalist expansion. Ideas of ownership, modernity, and tradition are questioned, using the history of Senegal and its role as a major agricultural hub during and after colonialization. Increasing biodiversity in agricultural practices and focusing mostly on domestic food security while turning to other industries to provide economic growth, such as IT services or manufacturing, may be steps in the right direction.