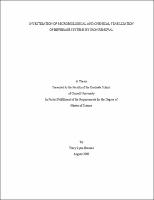 Iron is a ubiquitous element that is necessary for microbial nutrition and growth and, thus, potential food spoilage. In addition, iron has an extremely high affinity for oxygen and, as such, it may promote oxidative processes in beverages and foods, thereby requiring additional preservative considerations. Specific removal of iron by chelators may constitute a method to replace or synergistically enhance the action of traditional preservatives and antioxidants in many food applications. Prior to studying the effects of iron removal on microbial growth and oxidative color changes, iron removal efficacy was first evaluated in a chemically defined medium using an insoluble iron chelating resin (FEC-1) in a column extraction process. The resin displayed superior selectivity and affinity for iron, significantly reducing iron levels by 87% to a final concentration of less than 2.0 ppb. In this medium, the resin reduced copper levels by 99.9%. The extracted chemically defined medium was used to study the effects of iron removal on microbial growth. The removal of iron from the chemically defined medium had a negative effect on growth, reducing growth of most microorganisms by 25-80%; however, the concentration of iron removed from the medium was not sufficient to fully inhibit yeast growth. Candida albicans exhibited little growth reduction (less than 25%), and although thought to produce hydroxamate-type siderophores to aid with iron-limited growth, siderophores were not detected. Select food preservatives (sodium benzoate, potassium sorbate) were added to extracted and non-extracted chemically defined medium to evaluate a possible synergistic effect on the growth reduction of Hansenula anomala. This organism exhibited greater tolerance to potassium sorbate (350 ppm) than to sodium benzoate (200 ppm) and no differences were found between growth in extracted versus non-extracted media. Iron removal was surveyed in various complex media. The majority of samples were batch extracted and the resin was found to decrease iron concentrations by >90% in seven samples out of 13 samples. Copper was also reduced in some samples although not to the same extent as the removal in chemically defined medium. The resin removed iron in Sauvignon Blanc wine by 99.7%, thereby, significantly reducing oxidative color changes. Significant iron leaching was observed in the extracted chemically defined medium after submersion of food grade stainless steel ferrules. The initial iron concentration of the chemically defined medium was ~2.3 ppb and was increased to 166.4 ppb after one hour of exposure to the ferrules at room temperature. The ferrules were not pre-treated to remove fugitive surface iron from the ferrules and likely it was this fugitive iron that was detected in the samples. Metabolic changes were observed during growth of Candida vini and Candida albicans in iron-extracted and non-extracted chemically defined media. Both organisms excreted citrate, succinate, and acetate. Acetate production by C. vini and C. albicans was delayed in extracted medium. C. vini produced significantly less succinate and more citrate in extracted medium compared to growth in non-extracted medium implicating aconitase as the limiting factor in the metabolic pathway. C. albicans produced negligible quantities of citrate in extracted medium suggesting the use of an alternative pathway in which aconitase is not the limiting factor.