Origin of Propulsion: A synthetic view 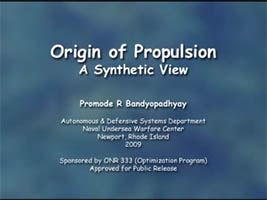 How did the propulsion of small animals evolve into those of larger animals? We implement the concept that brain and mobility of animals evolved together (ASME JFE v131 031801-29 2009...IEEE JOE v33 563-578 2008... JEB v211 206-214 2008.). We follow a synthetic approach where hypothesis, experiments and animation are added or subtracted to the basic elements from known results (fluid dynamics video). In animals, the propulsion mechanism is simply the equality of elastohydrodynamic forces and drag. The controller is changed through optimization and the actuator is enlarged through imagination but within the structural constraints of the smaller animals. The nonlinear dynamics of inferiorolive neurons is taken to be fundamental in the phase synchronization of actuators in all animals. It is shown that the structural and kinematic building blocks of elastohydrodynamics have a higher degree of diversity in the cilium of paramecium and some are dropped or altered in an optimization process whereby the Reynolds number of the propulsors increases. In other words, the animal conceivably becomes larger and moves faster or increases agility as both the brain and actuators co-evolve as intrinsic and dormant structural and kinematic abilities come to the fore.