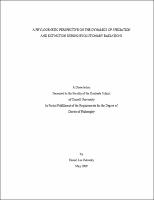 One of the most striking features of the natural world is that some groups of organisms are stunningly diverse while many other groups are species-poor. Both intrinsic, lineage-specific traits as well as extrinsic ecological factors can influence species richness through their influence on speciation and extinction rates. Here I investigate intrinsic and extrinsic influences on the diversification process, using a joint theoretical and empirical approach. I focused on reconstructing patterns of species diversification from time-calibrated molecular phylogenetic trees, which provide a valuable window into macroevolutionary tempo and mode for the large number of groups with inadequate fossil records. I review the manner in which species traits influence the dynamics of speciation and extinction, and I relate the literature on "species selection" to the emerging perspective on diversification rates from modern molecular phylogenetic studies. I argue that this literature demonstrates the effects of species selection on both species richness and the distributions of phenotypic traits in higher taxa. I develop tools for analyzing variation in speciation and extinction both over time and among lineages, including a new analytical approach for modeling rates that vary continuously through time. Using several real phylogenies and simulations, I show that, under the birth-death model, the phenomenon of early rapid diversification in phylogenies can only be explained by decreasing speciation through time in conjunction with low background extinction. I develop an alternative model that postulates constant diversity and a balanced speciation-extinction process that can also explain the rapid accumulation of lineages during the early stages of many radiations. I found evidence for an explosive increase in diversification in a lineage of Australian scincid lizards, suggesting that the evolution of traits associated with climate tolerance may have played a role in shaping patterns of diversity in this group. Using multiple published datasets, I tested three hypotheses for the absence of an age-diversity relationship in higher taxa, including (1) among-clade rate heterogeneity, (2) clade volatility, and (3) ecological limits on clade growth. Using a new modeling framework, I found that only ecological limits are capable of explaining the observed patterns.